A tool that will allow you to build profiles around your subscribed mods to quickly launch into a local game in Insurgency: Sandstorm with your desired mutators/map/game configuration.

The ISLPL is a side project of mine that I have been working on for the past month and I wanted to throw it up in a guide real quick to separate its development progress from my other mod. This was built simply because there is currently no easy way to play locally with your mods without fussing with the in game console. The launcher essentially generates these commands that you would have to type into your console and starts the local match along with the mutators/map you have selected. Furthermore, since a lot of mutators have special configuration options that are needed for them to work properly, you have the ability to add those options directly from the launcher. Since the launcher has the ability to create profiles, you can switch between these profiles and quickly launch into a game with any variation of your mods and configurations. The launcher is still a work in progress so any feedback will be much appreciated! 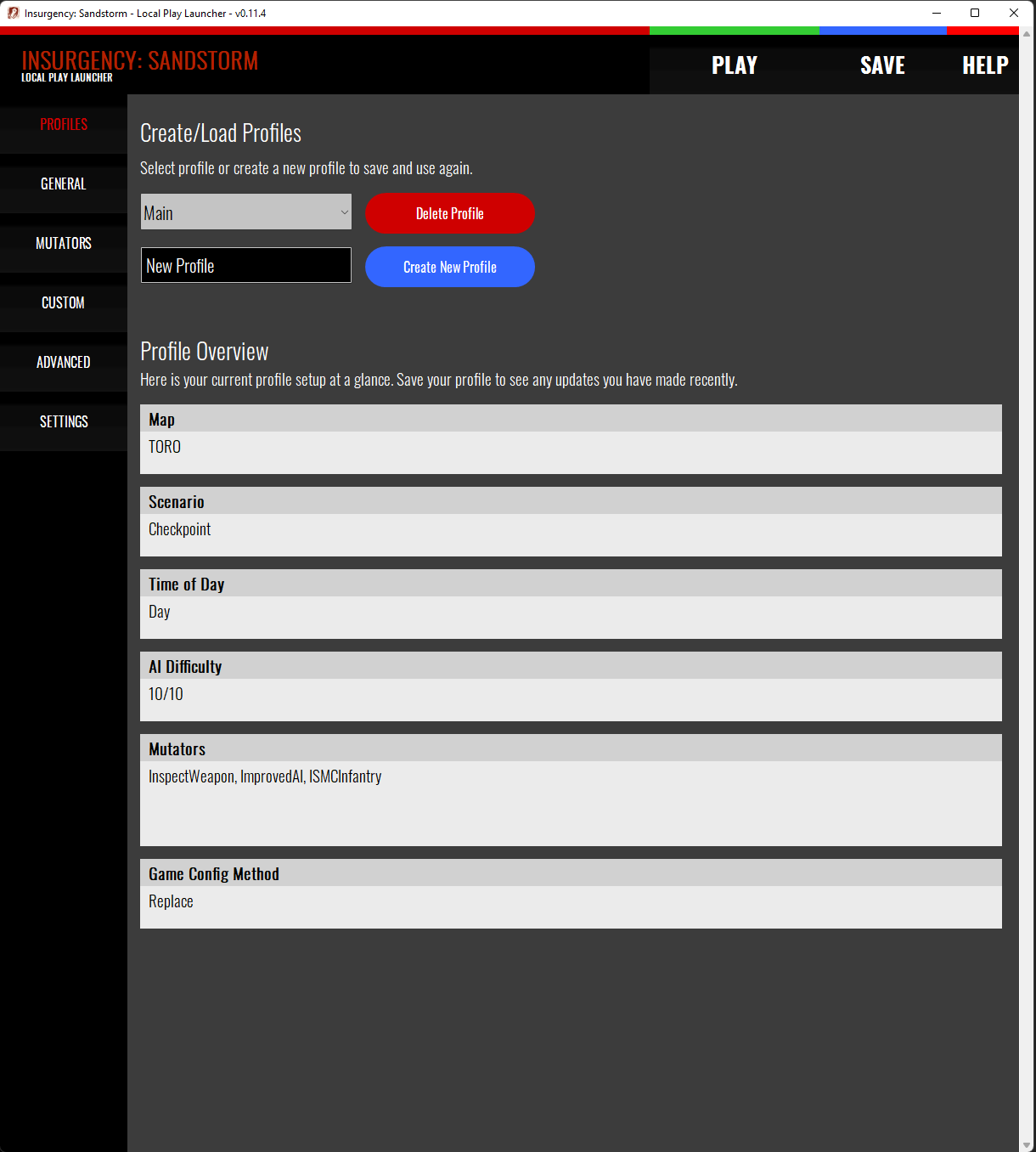 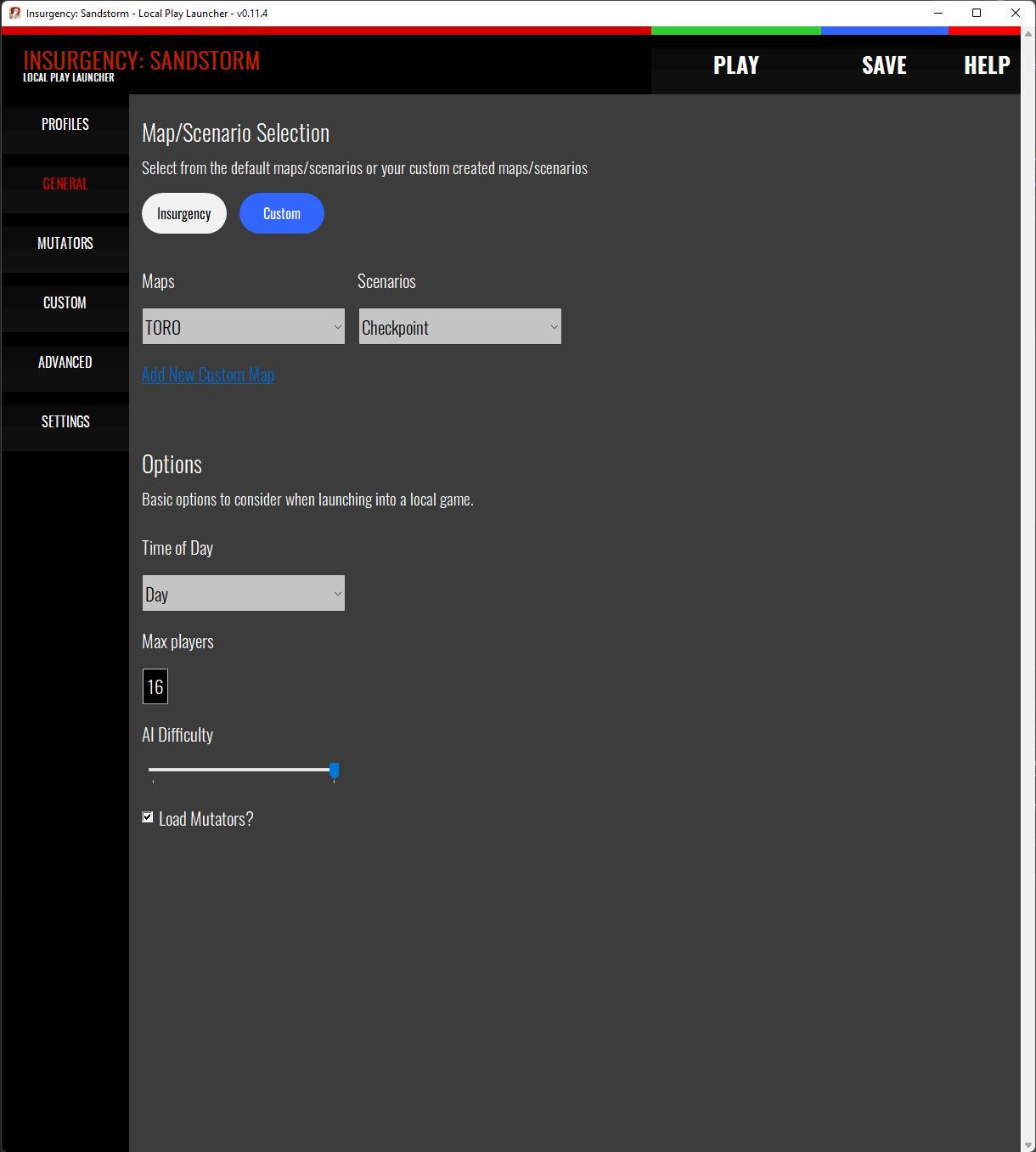 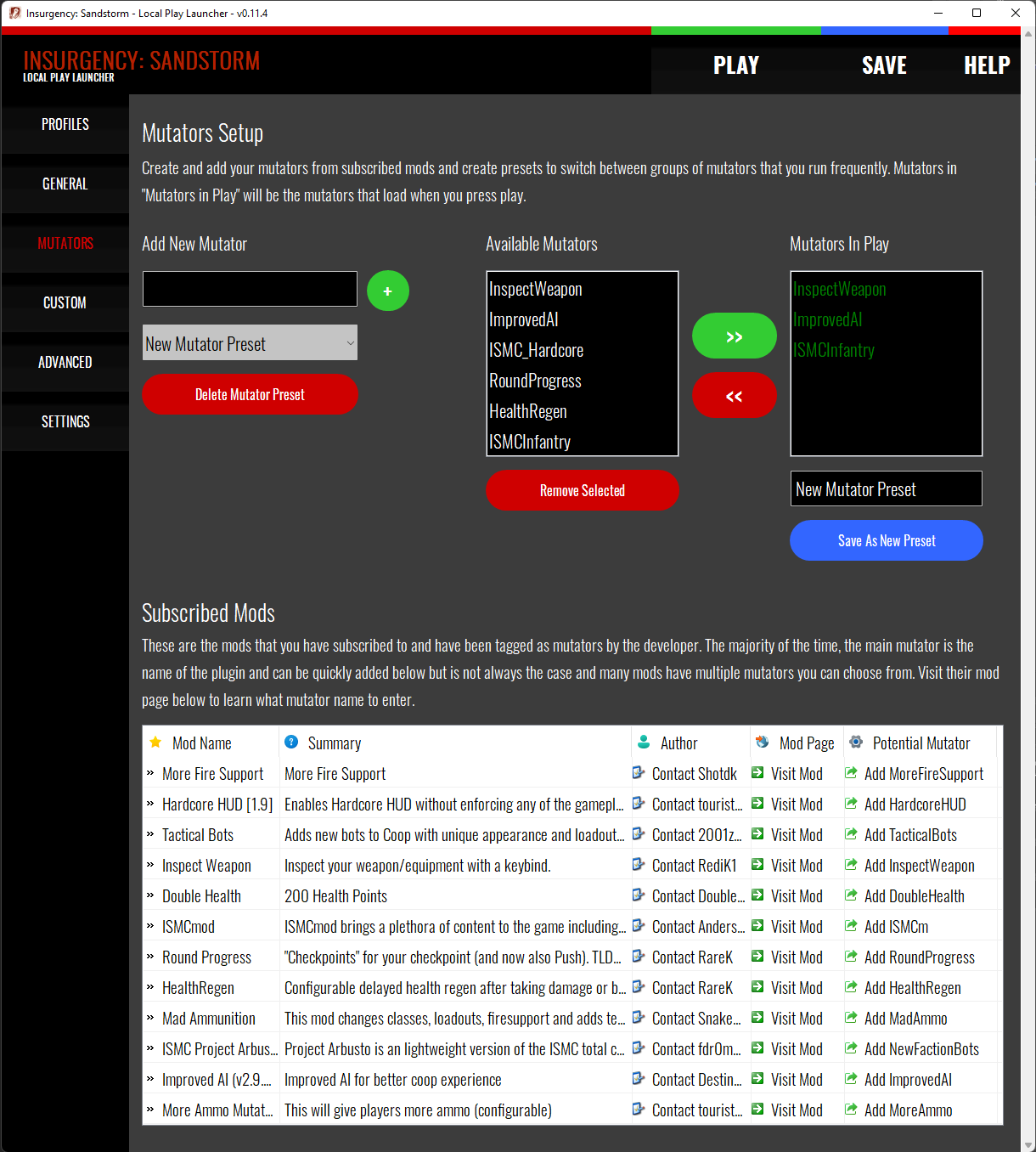 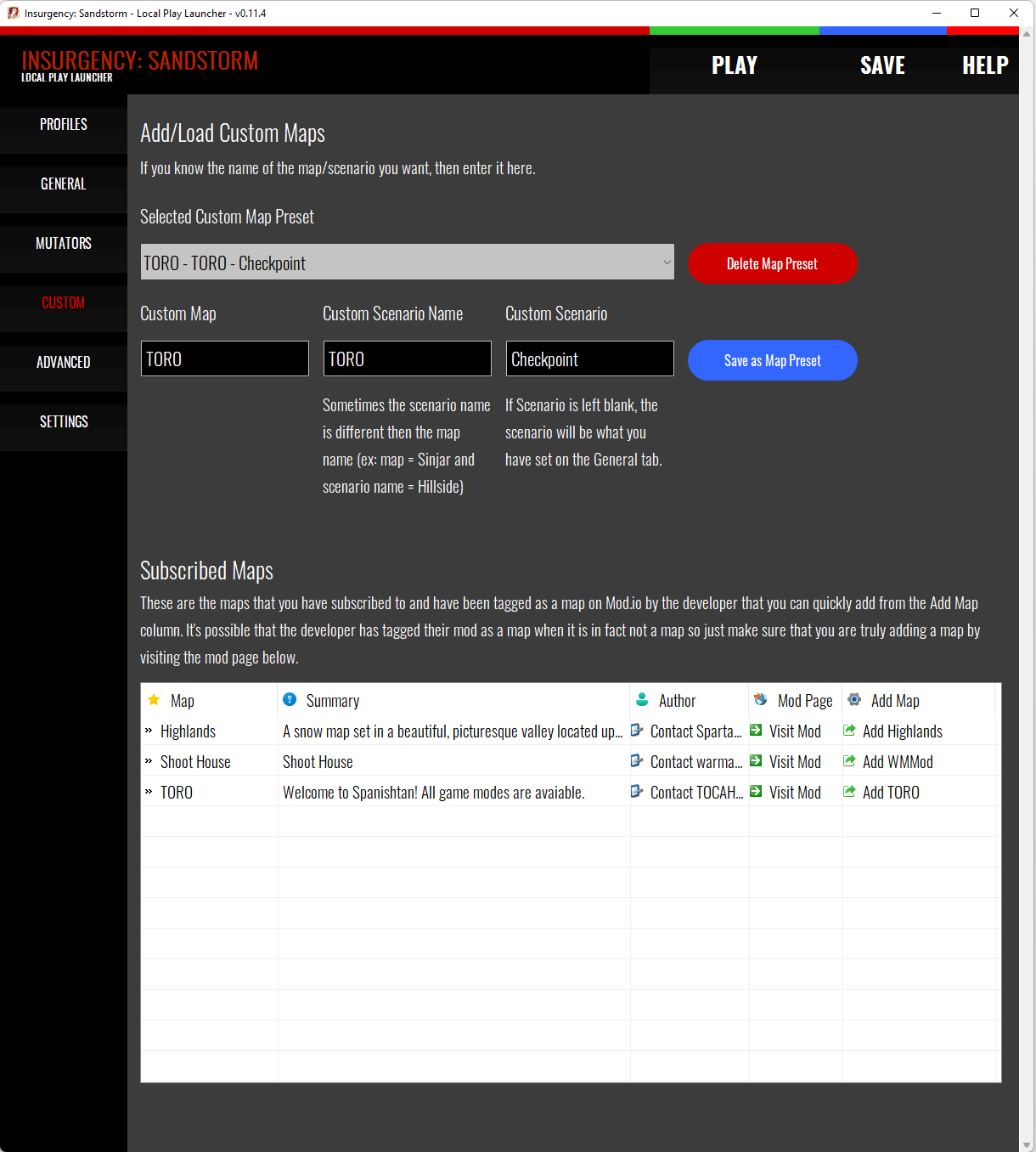 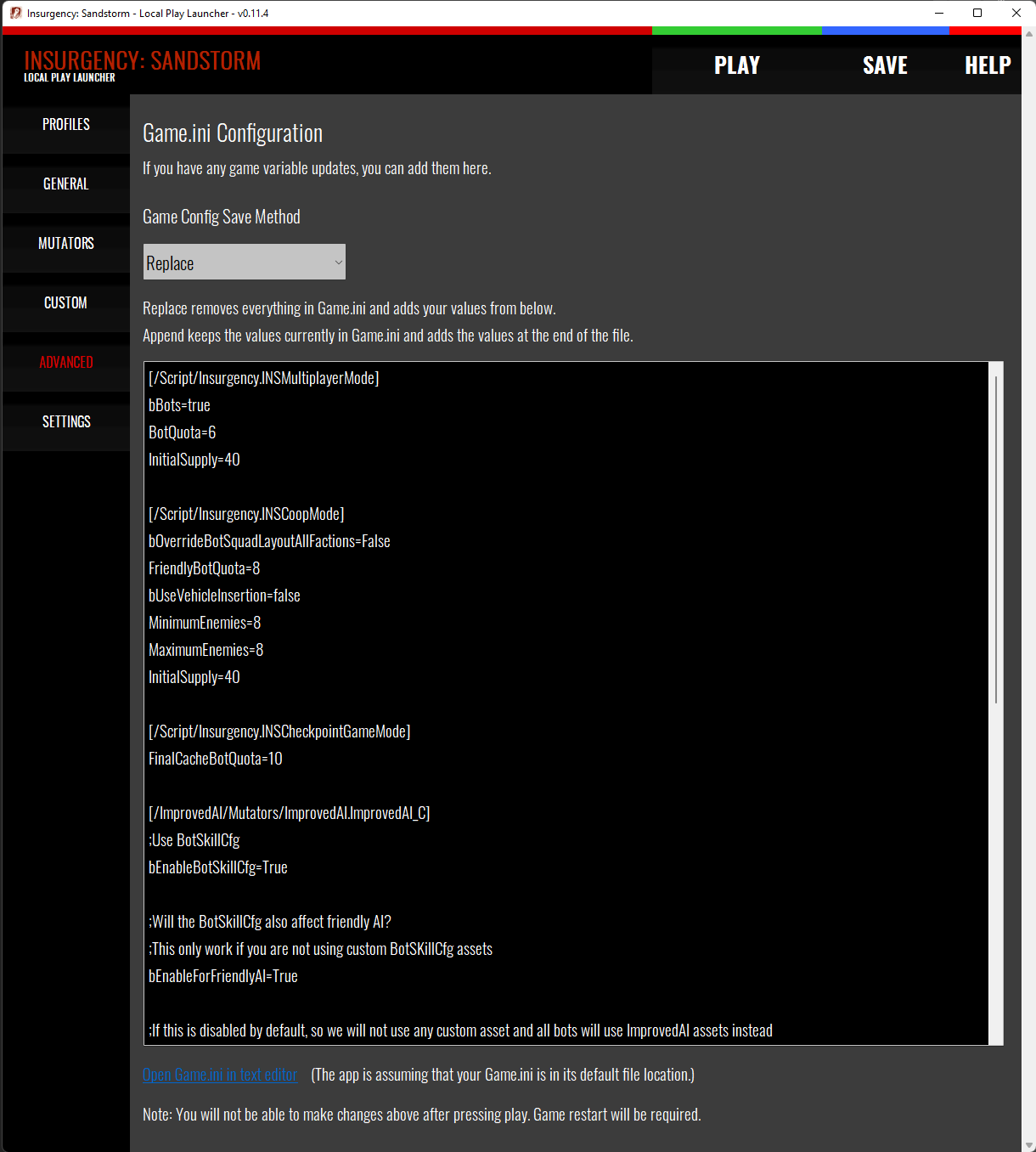 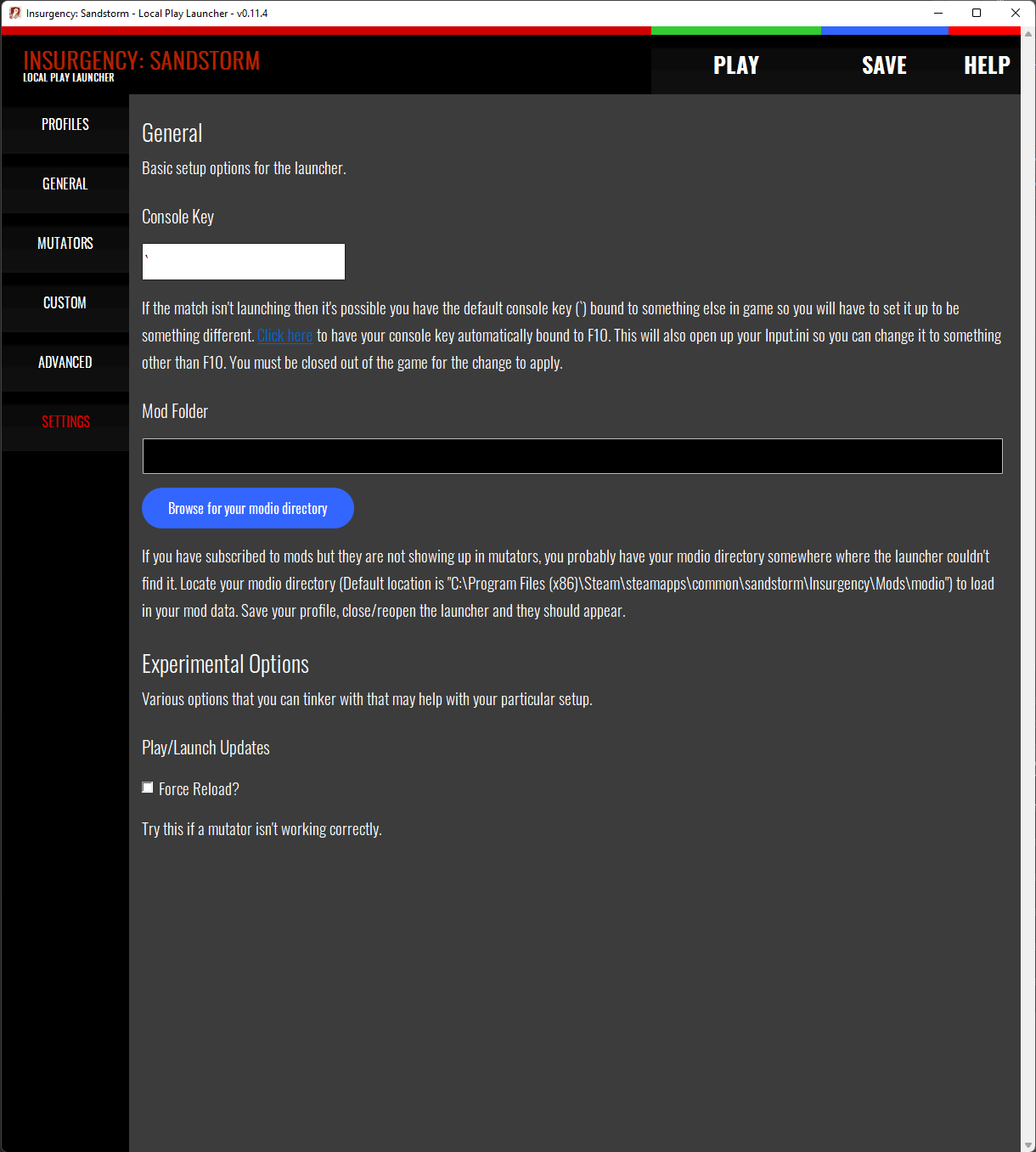 This is so good ! thanks a ton for making it better and better

Thanks man! Slowly but surely

Hey RediK1 every time I save a profile with "Append" option chosen, it immediately switches to "Do nothing" and does indeed do... nothing.

It actually does that purposely so that you don't accidentally append multiple times. Are you saying that it doesn't append anything in your Game.ini at all? When you click the link to the Game.ini, does it open the file?

My Laucher isnt working, i press play and nothing happens :C

Make sure you have your console key setup in the settings tab! Also, make sure Insurgency is running before pressing play.

I cant found it on my options

It once started but with only one mutator active (inspect weapons). I manually added location of mods and after that mod does not start. I even changed console key to f10 with no results. Tried fresh download without luck. Clicking play button while game is minimalised does do nothing, odd.

the same thing happens to me

The mods aren't working, it will load me into a match but its just vanilla

The map and scenario launching and the mutators are loading. Unfortunately the friendly bots are only moving 10 steps forward and then back again. The enemy bots are staying completely still. Improved AI mod is installed and the AI level is set to 10. Any suggestions what I could do? Thanks in advance.

I'm having a problem with adding custom maps from map pack mods. The forms I fill out end up messing up the syntax in a way that cannot be fixed without entering things manually into the console in game. I'll give you an example, with the 2014 map packs. Scenario_Embassy_Push. If I enter "Push" in the Custom Scenario field, in the command line it will give me something along the lines of Push_security (not sure if i got it right). If I leave it blank, it just gives me whatevers in the general tab which is not what I want. The thing is that the proper spelling for that scenario is just Scenario_Embassy_Push , with no _security or _insurgent following Push, but there's nothing I can do to remove that part. Also I haven't run into this specific problem so far but its how the middle field will automatically add Scenario_ before what I input in there, I'm guessing this would be real problematic if a mod's proper scenario name didn't include Scenario_ before the name of the map.

If I were to just write Firefight or Checkpoint in the custom scenario field I won't end up with any extra words like East West or Security and Insurgent why did the term Push have to have that added. Took me a bit to figure this stuff out when I was getting black screens after loading, I wish the syntax inputs of those forms were a lot less ambiguous and more intuitive than the way they are now.

Hello friend, tell me what could be the matter, I set up everything as expected, opened the game first, then clicked play in the launcher and nothing happens, checked on the console command (F10 selected) everything is fine there. What could be my mistake?

Can't seem to load any scenario on Refinery, just get black screen then crashes, there is no map loading screen. I have tried adding it as a custom map but same results. This was happening before latest update too.

Its also generally Not Working, It doesn't load Mods or Mutators it wont populate the list at all

Friendly AI bots do not spawn. I've tried everything.

Thank you for this mod! I've been using it with official maps up to this point, but just downloaded Redwood Reborn. It shows up in the custom map list of the launcher correctly, but when I try loading it, the game eventually reverts to loading the previously-used official map. I tested that the maps do indeed load by entering the map commands in the console. Do I have something set up incorrectly with the launcher?