View all by RediK1 · Mutator mods

This mod simply allows you to set a keybind so that you are able to inspect your currently held weapon similar to most modern FPS games.

You just need to add the mutator to your server launch mutators (-mutators=InspectWeapon) and the mod in Mods.txt.

Note: I would recommend using the -ModDownloadTravelTo=.... to your launch parameters to ensure the mod is downloaded and activated fully.

I wanted to share this little application I made that lets you quickly jump in to a local game with your desired mutators (From any mod, not just this one). After you subscribe to a mod in game, run this and hit play once you fill out the form. It will launch into the map with the mutators you provided. 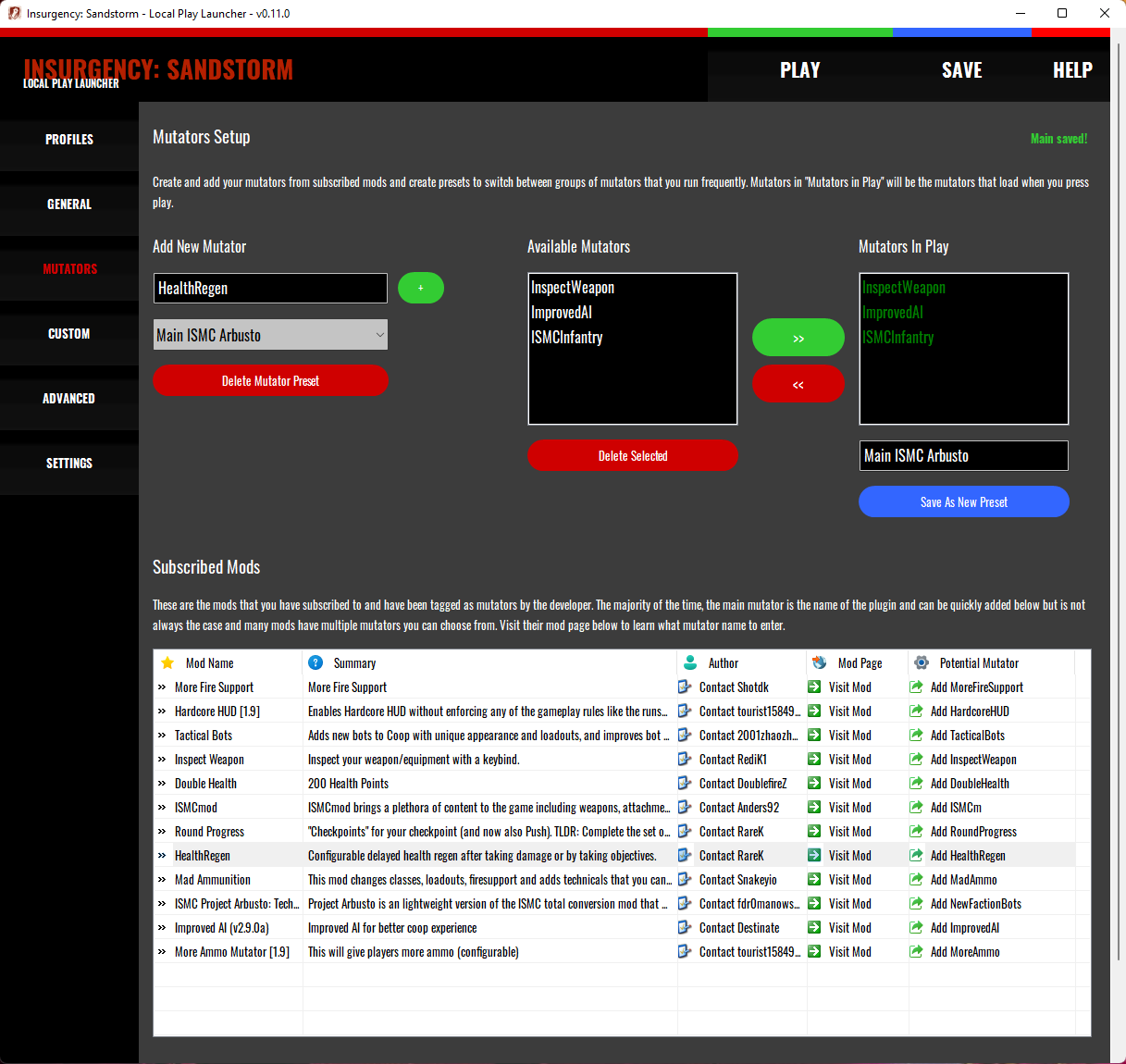 Subscribe to the mod in game and then open up console with the back quote key (the key next to the 1) and type (Or copy/paste):

Open Sinjar?Scenario=Scenario_Hillside_Checkpoint_Security?Lighting=Day?Mutators=InspectWeapon (It doesn't matter what map or scenario you add. This is just an example).

You can comma separate more mutators as well such as ....?Mutators=InspectWeapon,ImprovedAI,ISMC_Hardcore.

NOTE: You may have to run the command twice for it to work the first time or just load in and open the Admin menu to change the level.

Once you have joined a server with the InspectWeapon mutator, press F2 when you spawn in to open the mod settings panel to setup your keybind that will be used to inspect your weapon. For gamepad users, double tap your "Use" button to inspect.

Is it still works? I can't make it works on my server. Every other mod is working (ISMC, Medic, Counter, EasierFire, etc).

I just checked on my server and launching a local game to make sure and it still seems to be working. Maybe just check the spelling on InspectWeapon in your launch params?

THIS STREAM WAS PAIN, but it all worked out at the end! I dropped all 30 enemies on PRECINCT. CHECK IT OUT

Hey! Just wanted to shout out the community. Insurgency Sandstorm is the almost perfect experience of close quarters infantry combat. It reminds me of Black from Criterion, with Rainbow Six Vegas terrorist hunt.

Very nice mod! Thank you.
Is it possible to add more setting options for the Y axis of the weapon?

283 Folders in Modio subfolder and none of them show up... are you expecting this to auto populate? or are we being required to manually add them all?

How about a small interface to locate the game .exe which inturn grabs the mod folder

Make sure you read the instructions on the modio guide! It answers these questions in my little write up but where you put the exe is irrelevant so no worries there. Also, make sure to check the settings tab when you open up the exe to locate your modio folder.

I'm sure it is :) I have been away for the past month so Ill have to refresh my memory a bit when I get back in it.

Hey. Great mod everything seems to be working except the bots which don't seem to load up at all?

Hey hey. Are you referring to the inspect weapon mod or the local play launcher? The Inspect weapon mod shouldnt prevent bots from loading so maybe you just dont have bots enabled for the game mode from your game.ini. If you are referring to the local play launcher the same applies and you can check out the advanced tab which has an example entry that does exactly this. You just have to switch the mode to replace or append so that it writes to your game.ini. Hopefully that helps!

Hey dude. Yip I meant local play and I got it working and it works great. Thanks for replying and the great mods.

Hi, in the Subcribed Mode none are showing. What could be the issue? I'm subscribed to 21 mods from which at least half are/have mutators. They do show up in-game.

Hello :) So that is because your game isn't in the default Steam location. I plan on adding a method for you to choose your mod directory to read from in a future release. Sorry about nothing showing up in the meantime. I will try to get it in sooner rather than later.

Ah that makes sense, it's true that the game is on another drive. I see you uploaded a new version, I'll try it when I'm back home!

I'm actually going to assume that they probably won't load in since the patch was for the launcher having trouble locating the modio folder in the default location. I did just release an update (0.9.0) that does give you the ability to manually locate your modio folder though so give that a try!

Mine is installed in the default steam location, pretty sure. Is there anything else that could be affecting it?

Ok, I think I figured out what the problem may be. Go ahead and try the latest version (0.8.1) and let me know if they show up.

Damn that was fast!
Had to reinstall insurgency real quick because in trying to find a solution I messed something up with mod.io haha, giving the launcher a try now real quick, will report back in a couple mins.

lol yeah I think it was on my end sorry about that. I should probably be a little more careful with throwing up releases without putting it through a pipeline since there are a bit more people giving it a go. I'm kind of keeping quiet about it until it's actually ready so this may not be the last bug you encounter :p

Oh dw about it at all, I'm just happy the launcher exists in the first place, it's exactly what I've been looking for since I bought Sandstorm!
Sadly though it still doesn't work for me, but maybe I might be doing something wrong as well?
In case the info helps, I tried it out on a fresh install of the game, with the mods freshly installed as well, all to C: drive (and the default steam installation path ofc).
Also tried starting the Launcher in admin mode, dunno, instinctive troubleshoot thing to do haha, but also had no effect.
Then out of curiousity tried checking what happens if I press play in the launcher after setting stuff up and the game being at the main menu, as instructed in the launcher. Interestingly though all it did was just open the normal game selection from the Game's main menu, as in the "Coop, Versus, Community Servers" screen.
If you need any more info on my system or installation or any testing or anything, I'd be glad to help out in any way I can!
Really appreciate the work you're doing out here btw! :)

Oh oops, ignore that part about the "Out of curiousity" thing when pressing play, had my PC's keyboard layout set up to one where the tilde key is somewhere else, my bad, while still not showing mods it does apply the other settings completely and starts the game as intended!

Yeah, the console key is another thing that I need to get added so players can set that up prior to working with the launcher. I'm curious what your current path is to get to your modio folder, is it C:\Program Files (x86)\Steam\steamapps\common\sandstorm\Insurgency\Mods\modio? I just need to patch in a way for people to get it setup. The only other thing I can think of is that it located another Steam folder in the common places steam resides and that particular folder isn't where you have sandstorm. This stuff helps me figure out what I need to focus on so I appreciate it!

Yeah the path is "C:\Program Files (x86)\Steam\steamapps\common\sandstorm\Insurgency\Mods\modio", and yeah that could definitely be, I have an SSD and 2HDDs and they all have a steam library folder on them.
Though sandstorm and the launcher are both on the same drive, which is also selected as steams default drive.
Hope that helps!

Thanks man! I put up another release (0.8.2) and I'm crossing fingers my updates fixed it for you but if not, I can just focus on having the manual mod folder assignment functionality in place. Also, is that Linus in your profile pic? lol

Works perfectly now, thank you so much!
My insurgency playtime is gonna skyrocket now lol
Both the launcher and the inspect weapon mod are great ideas btw, can't wait to see what comes next!

Haha I think we all felt that with him that day.

Glad it's working for you now! It's crazy dude, it has been a journey the past few months learning unreal and then this scripting language for the launcher. I did the inspect weapon mod because I could tell they went all out with the models and animations so I was pretty bummed to not be able to take a closer look. That took me down a rabbit hole and then when I was ready to put it up on mod.io I hated the fact that I had to tell people to open up console and type this long string to try my mod locally. That took me down the other rabbit hole with the launcher. I see other modders saying to not subscribe to their mod for local play because it's for servers only but their mod works fine locally and it just feels like they are saying that due to the extreme lack of accessibility so hopefully eventually the launcher can bridge that gap a bit. Anyways, thanks for giving it a go!